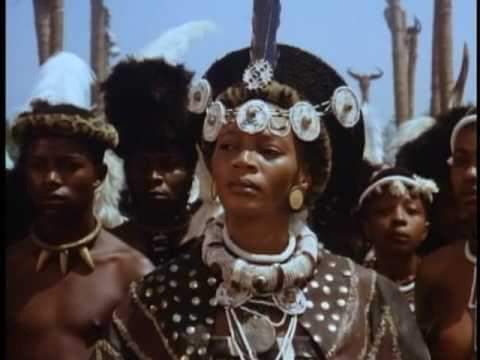 Dudu Mkhize as Queen Nandi in the popular Fox tv miniseries that was first released in 1986 Shaka Zulu, and aired seasonally almost through the late 80’s all the way up until the mid 90’s throughout the month of February, in honor of Afro-American history. Here is Nandi upon Shaka’s, her son, successful coup, snatching the Zulu throne, a coup instantly turning into a ceremonial coronation. In all confidence this exiled royal family knew of surety that achieving such immediate sovereignty was so secure until they came “dressed to kill, ” literally also,.. “laughing,”….considering what happened to Sigujana. On the former idea, of dressed to kill, one can no doubt agree Nandi was.

Costume designer for the tv miniseries was Italian native Valentina di Palma. Above anything else as such is the case when anyone else in garb, it is obvious that which is subtle or overt displayed in the seasoned temperament in Nandi is what makes the costume AWE STRIKING. It’s that silent magical aura, that rescues the outfit from being completely drab. It is as I spoke of in my prior post or what I call now a Mt. Everest of self realization. That self realization in no doubt being solely confidence, but also journeyed experiential self awareness. Dudu Mkhize appeared to be quite successful in drawing this out of the queen’s character.

Now I would in no doubt, do Valentina a disservice if I did not acknowledge the mere fact that the costume a part from Dudu Mkhize being the altogether perfect specimen to “rock it,” is simply a well thought together spark of creative genius!!!! I love it!!!!! Not deflecting back to Dudu wholly, but a part from the fact her craniofacial(skull and face) symmetry, and entire anatomy makes harmony easy, it’s simply beautiful!!!!

The extra of it all, is what makes it all the more a sublime work of art to look at. What is commendable is the designer didn’t throw a random rainbow of colors together in some broad cliche inaccurate perspective of the African continent, not that I expect that of Valentina. The all too present black works well up against Nandi’s typically yellow brown skin tone. Shoulder downwards the artist was cautious enough not to desecrate the effect of the wonder of presentation…… by spiraling into an endless array of polka dots, but chose to wisely interrupt it with the mutually left and right slanted rust colored descending bars. One could add,…simply, “thought,”….is what makes her attire eye catching, but equally the complimentary geometrical patterns of accessories, contrasting in dimensions or density seen in the raised larger neck piece versus the less elevated one animate her whole context of dress(attire) in an inanimate kind of way. Animation becomes of subject seeing that back of the head tends to cheat the mind forgetting fashion aesthetic is not only associated with the flat(eye’s imagination)therefore causing raised dimensions to take it for a happy hijack of a surprise. I must add I love the way the raised elevated neck piece coherently repeats the designer’s play with circles. What’s great about Valentina she manages to pull it off void of a kind of cheap small girl sweet tarts and jellybean type boredom.

Now it’s not as if her more than likely cow skin poncho hasn’t worked hard enough in epitomizing the whole work of it all,….but daaaaaaaaaaaaaa’ng,….oh my goodness!!!!!!!!!!!!……the head piece alone, seriously!!!!!!! Come on!!!!!!!….. the head piece,…marveling, so serious!!!!! You’ll catch glimpse of immediately that shape has a redundant beautiful symmetry with her higher broadening lower narrowing face structure. Believe me this definitely is not pretentious fashionista mumbo jargon. On the contrary the more rounded face Pampata in Nandi’s rear played by Tu Nokwe no doubt could not pull it off. On top of that the designer was smart enough to vastly contrast the hat texture of her in comparison to her entire garb, not that this is a rule of thumb, but in this case it keeps the eye stimulated a midst the few colors(nothing wrong with color choices). Above anything else, the crescendo of it all, is in spite of there being at least four detachable ornamented pieces Valentina has managed to pull this hat marvel off without it appearing as too much. The white draping notched(say no more) jewel, the fur leopard attached piece, accented by the old lace colored earrings sing too beauteous of a song together no doubt. Yet I can not fall short of saying, is what tops it all off, is that “wonder why” of a feather(not wondering myself, but more so of a general wonder that typically pokes at the human mind). It is a fanciful “wonder why” I looooo’ve so dearly pinned perfectly by a conscious patterned jewel that makes it all the more just stand out!!!!!!! I’ll end on this note, saying this certainly was achieved in this scenario with one of my favorite quotations by Pablo Picasso, that being, ” L’art lave loin de l’âme la poussière de la vie quotidienne!!!” Art washes away from the soul the dust of everyday life!!!

Hi there, ever since childhood I’ve been an avid patron of the arts in all it’s multiplicity of forms, values, sounds, and hues to the naked eye. On the visual level fashion or costume on a film or traditional cultural platform has always no doubt been one of these art forms that has early on,…tapping into the more intense essence of the truth of it all, has had me spellbound for years!!! That being especially the dress of people of a regal type bearing, costume of film nobility, or of an actual monarch, even that of shamanic and priestly figures. I guess this being because these peoples often projected a spellbinding aura that overshadowed even in their clothing, giving it meaning and context in the drama of their presentation. Their temperaments often to me in their unique complexities whether heroic, villainous, or neither often in such confidence mode, often represented some type of epitome of self realization. This fascination has always traverse the fields of every cultural context whether it be 16th century English royals, Japanese traditional Kabuki theater actors or a depiction of 19th century South African emperor Shaka Zulu or 21st century Red Carpet events. Speaking of traversing fields, or settings, the eye for such regality or ceremonial exoticism has in no way even restrained me to cultural contexts, but equally has all my life made me an eye spectator searching it out in very day to day social contexts, in a restaurant, in a bar, on the street. Over the years going through multiple cycles of spiritual evolution, and a few catharses, has made my eye a tad the more bigger for it all. Not only this, currently, as a personal stylist evolving into an image consultant the fervor only grows to share an eye full. Therefore I intend on using this platform to expound upon the art of it all, and the people who make these larger than life gestures from as far back as Aztec Montezuma, Florentine Medici elites, to 21st century Lady Gaga and dandy lion Andre 3000.

This is a text widget. The Text Widget allows you to add text or HTML to your sidebar. You can use a text widget to display text, links, images, HTML, or a combination of these. Edit them in the Widget section of the Customizer.